Leave a comment
By cdmart04 The War on Blackness, Uncategorized

The War on Blackness Part 1: A Quick History Lesson

This article is part of a series highlighting the injustices brought upon black and brown bodies because of the War on Drugs. 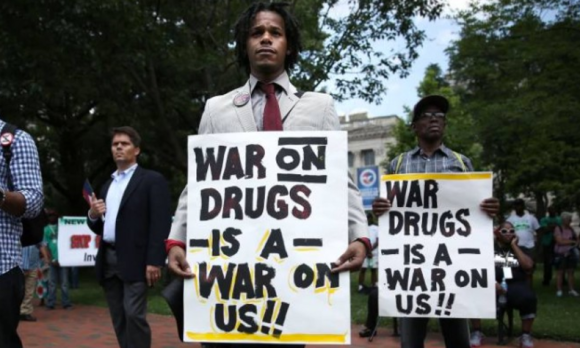 The Lite Version of American History

If you know anything about American History, (which you may not, no shame, because our education system doesn’t properly teach the whole history of this country) you may have heard of the War on Drugs. If you grew up in the 1980’s and 1990’s you’ve definitely experienced D.A.R.E., an attempt at educating youngsters about the dangers of drugs, a program directly spawned from the War on Drugs. If you’ve never heard of the War on Drugs I will attempt to educate you about it…I guess (google exists as does an amazing documentary on Netflix by Ava DuVernay titled, 13th).

Fast forward a couple of awful presidencies later, and Hollywood Film Star Ronald Reagan is somehow our president. This is when the War on Drugs really starts to gain its footing. On October 14, 1982, Reagan formally declared a War on Drugs. Setting into motion, arguably, the most damaging chain of events directed towards the oppression of black people in America since slavery.

You see, the War on Drugs was not really a fight against the sale and abuse of illicit drugs, rather, it was a war against poor black and brown people. Why declare an unofficial war against fellow Americans? First let’s be real… Who is defined as an American? Certainly not black and brown people who have been treated as second class citizens since they were legally declared second class citizens. Second, what is the basis of any war? Control, power, and domination. In order to maintain white supremacy the white men who control our county had to devise a master plan to maintain the racist orders of society.

At the time the War on Drugs was declared it had been established that everyone, regardless of skin color, religion, sex, creed, etc. was granted equal protection under the law (yeah right…). It has also been well established through studies, lived experiences, and general common sense that this declaration has never been practiced in American History. However, because the law does exist, the Grand Wizards of AmeriKKKa had to find a “colorblind” way to go about continuing the oppression of those Uppity Blacks.

Critical Race Scholars Michael Omi and Howard Winant created this theory called Racial Formation. They define it as, “the sociohistorical process by which racial categories are created, inhabited, transformed and destroyed.” Perhaps the biggest scam, I mean racial project, in American history was slavery. The institution of slavery was founded on an inherent ideology that black people were not people, but subhuman. Because of their “Otherness” black people were deemed inferior. Thus created the binary that is black and white where white is good and black is bad. Following this fucked up reasoning black people could be treated inhumanely because they weren’t considered human. Slavery was adopted and practiced, then transformed into something thought to be so evil that Northern white saviors with their own agendas came into abolish it. Destroying slavery. A perfect example of the process of racial formation.

Fortunately for black people, the 13th amendment to the United States Constitution states that no person shall be held as a slave. Without it, I’m sure under the reign of Trump we’d all be back in the cotton fields. Unfortunately, there is a very specific clause that creates an exception to the rule in cases where people have committed a crime. Essentially, if you have committed a crime you can legally be held as a slave. Just let that sink in…

So, because the Klansmen running this joint were looking for a colorblind way to put blacks back in their place they adopted this colorblind “War on Drugs.” But duh, obviously it wasn’t so colorblind.

Ok Bih, Where Are You Going With All of This…?

Bear with me! I swear I’m getting to it!

White people basically said, “ok…we will give y’all some little superficial protection laws or whatever to shut you up…we ain’t gon’ follow them tho…HA.” And so we have the “colorblind” war on drugs. White people, “don’t see color” but sure do see black people as criminals and white people as saints (even though, let’s be real, historically wypipo are legit the biggest criminals in WORLD history.)

Anyway, Reagan and his crew sat around and thought, “ugh what are we gonna do with these colored people? Always demanding more and more from us. We gave them their freedom and HUD housing what more do they want? How can we get rid of them?” Literally, that’s what happened. They probably sat around a conference table in the White House debating this. In fact, one of Nixon’s top aides, Ehrlichman, admitted that Nixon’s reasoning for coming up with the war on drugs was because,

“We knew we couldn’t make it illegal to be either against the war or black, but by getting the public to associate the hippies with marijuana and blacks with heroin. And then criminalizing both heavily, we could disrupt those communities…We could arrest their leaders, raid their homes, break up their meetings, and vilify them night after night on the evening news. Did we know we were lying about the drugs? Of course we did.”

Ugh. Is it just me or do those words hurt, like deeply. Anyway, clearly the War on Drugs as created by Nixon was adopted and really put into action by Reagan so we can see how the same ideologies (i.e. blacks suck, let’s get rid of them) were also adopted by the Reagan administration. The result was, as Ehrlichman said, an intense campaign that went after black people, painted them as villains, and made them into Public Enemy #1